We live in a world where plastic surgeries and beauty ‘enhancement’ procedures have become the norm rather than the exception.

Even so, spending $136,000 on 10 procedures just to get a certain look seems pushing it way too far. But that’s exactly what Jacqueline Koh, a 29-year-old fashion designer from Singapore has done to herself, in an attempt to look like a typical anime girl, with big sparkling eyes, a small chin and nose, a slim face, and larger breasts. 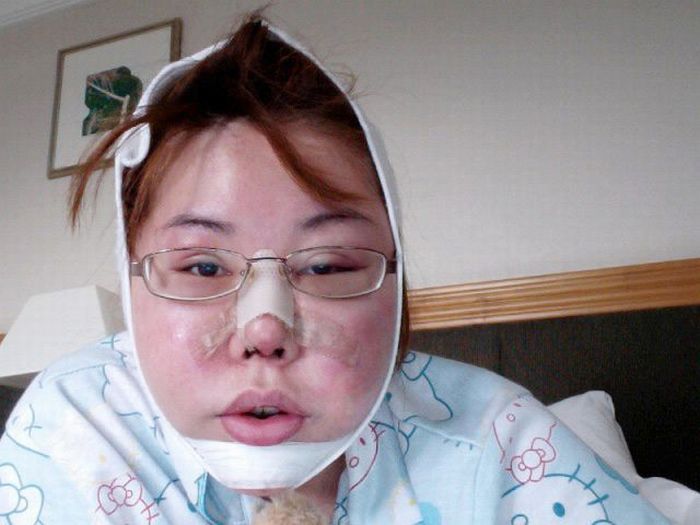 When I looked at pictures of Koh’s original face, I wondered why she would have wanted to change anything at all. However, she had long been unsatisfied with the shape of her chin and her protruding mouth. The trigger to actually do something about it came two years ago when she had put on weight. Gaining 6kg in 1.5 years without any change to her diet got her worried. At 1.6m tall, she weighed 48kg. I don’t think that’s a weight to worry about at all, but she thought she looked chubby. When no amount of exercise would help her lose weight, she went for corrective procedures.

Her first operation was  Vaser Lipo, a gentler form of liposuction, and it was a nightmare. The doctor ended up removing fat unevenly and she had dents and zigzag lines all over her body. Her weight increased to 58kg. Far from being discouraged from such surgeries, Koh then went on a rampage of sorts with treatments for her body and face. So far she has undergone Velashape (pulling of the skin to reshape her body), a boob job, double eyelid surgery, nose jobs, shaving of cheekbones, flattening of ears, and chin implants. She intends to get one final correction procedure done in March, after which she says she will be satisfied with her looks.

But that’s not really the end of it. Koh spends a lot of money to maintain her looks, as well. To smooth out her facial lines and nasal folds, she has biannual Botox and fillers that cost up to $1,000. Her daily skin-care routine consists of a face mask that costs her up to $100 a month. She uses handheld aesthetic machines every week to rejuvenate her skin. Talk about high maintenance!

Koh has written a lot about her beauty transformations on her blog. She also provides advice and information to her ‘fans’ about plastic surgery treatments and how to find good doctors. “I didn’t write about my procedures to become famous,” she says. “I wanted to help women become as beautiful as me or even more beautiful. When I was doing research for operations, people weren’t that open to sharing their experiences.” On average, she receives 800-900 e-mails a day asking for advice on cosmetic procedures. In spite of all this, Koh insists that she has had all the operations done to make herself happy, and that she’s still the same person inside. 10 operations seems a bit much, but as long as she feels good about herself… Although Jacqueline Koh’s transformation may look extreme, but it’s actually nothing compared to the efforts of people like the man who wants to look like Superman, or the woman trying to be the real-life Jessica Rabbit.