Are Laser and LED Light Therapy Treatments Good for Your Skin?

Light can be a powerful tool in skincare, whether it’s an LED facial or a laser treatment for acne. 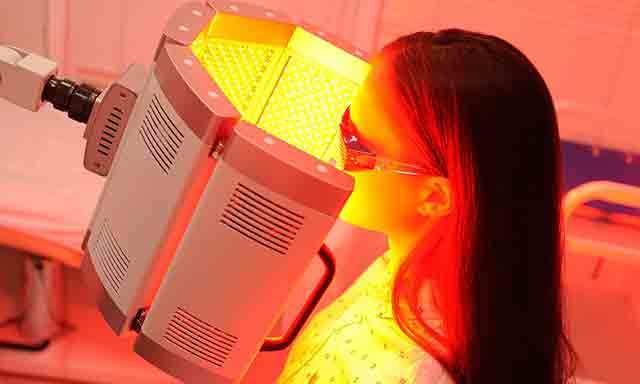 Light therapy can also seem a little mysterious if you’ve never done it before, because light doesn’t interact with the skin in the same obvious way as, say, a serum or moisturizer.

Here, we’re breaking down the basics of LED and laser skin treatments, explaining what they are, how they work, and experts’ advice for adding them to your skincare routine.

What is LED light therapy?

An LED, or light-emitting diode, is basically a special light bulb that only gives off light at a certain wavelength or colour.

These light waves can penetrate deep into the skin and cause reactions within the skin. Different wavelengths produce different results, but the three most popular ones used in skincare are blue, red and near-infrared.

Other colours including green and yellow are sometimes used, but the above three are the most common.

What are the possible red light therapy benefits?

“Red light is anti-inflammatory and has been shown to help stimulate collagen,” Zeichner told TODAY Style in an email. “For this reason, red light may also be used in treating acne, and ... it’s commonly used for its anti-aging skin benefits.” 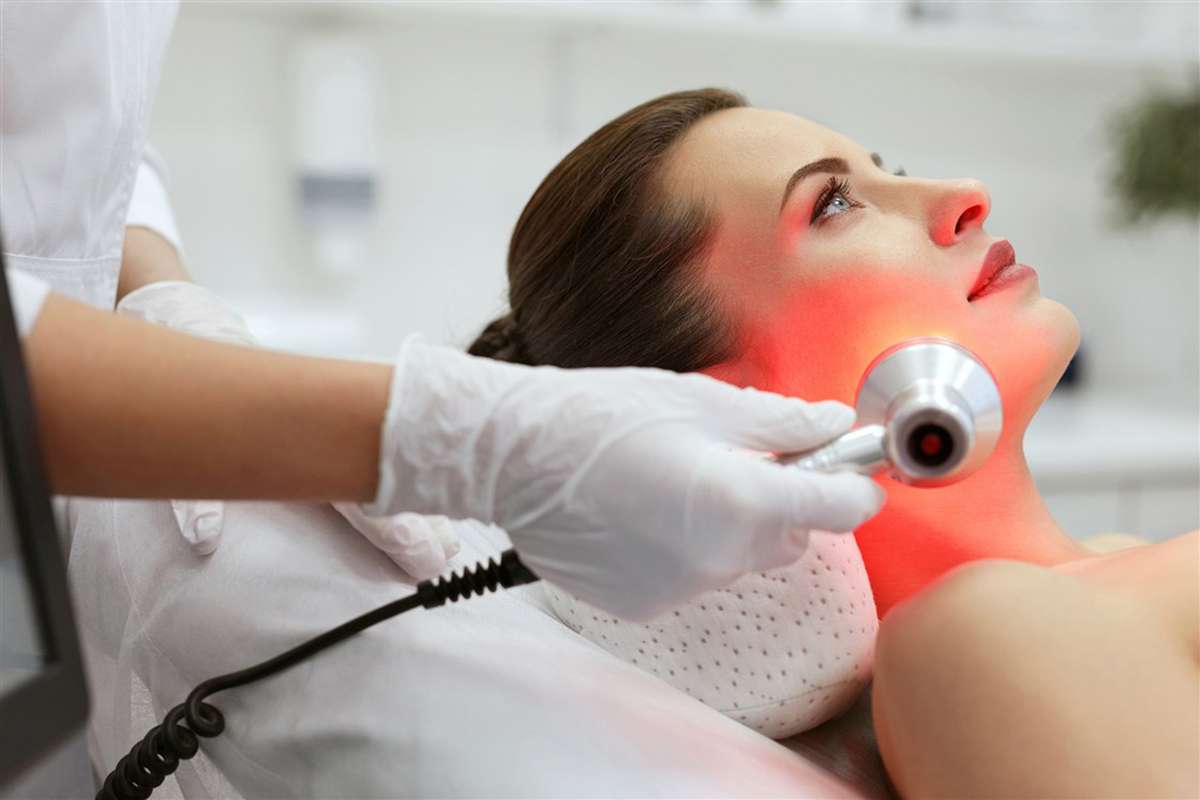 “I can do a really intense peel on somebody that would normally leave somebody really red for several hours, but after the peel, I can do red and infrared light and you walk out looking like a glowing angel,” she told TODAY Style.

Red light therapy is also sometimes used in sports medicine to reduce inflammation and speed up the healing of injuries.

What are the possible blue light therapy benefits?

While red light therapy can reduce inflammation, blue light therapy kills bacteria under the skin. This makes it an excellent tool for treating acne, which can be caused by bacteria in the pores.

“NASA paid grants to physicians to study the effects of light on the human body in the late '80s and '90s and what was shown was that when you use blue light, for example, on acne, it's going to kill bacteria even underneath the skin whether you extract it or not,” Vargas said.

“It's an incredible tool for an esthetician because if I’m doing a lot of extractions on somebody, for example, and then we do a mask ... I can then put the person under blue light and it will assure me that all the bacteria is gone and that the sites of pimples can heal freely without worrying about getting infections again,” she added. 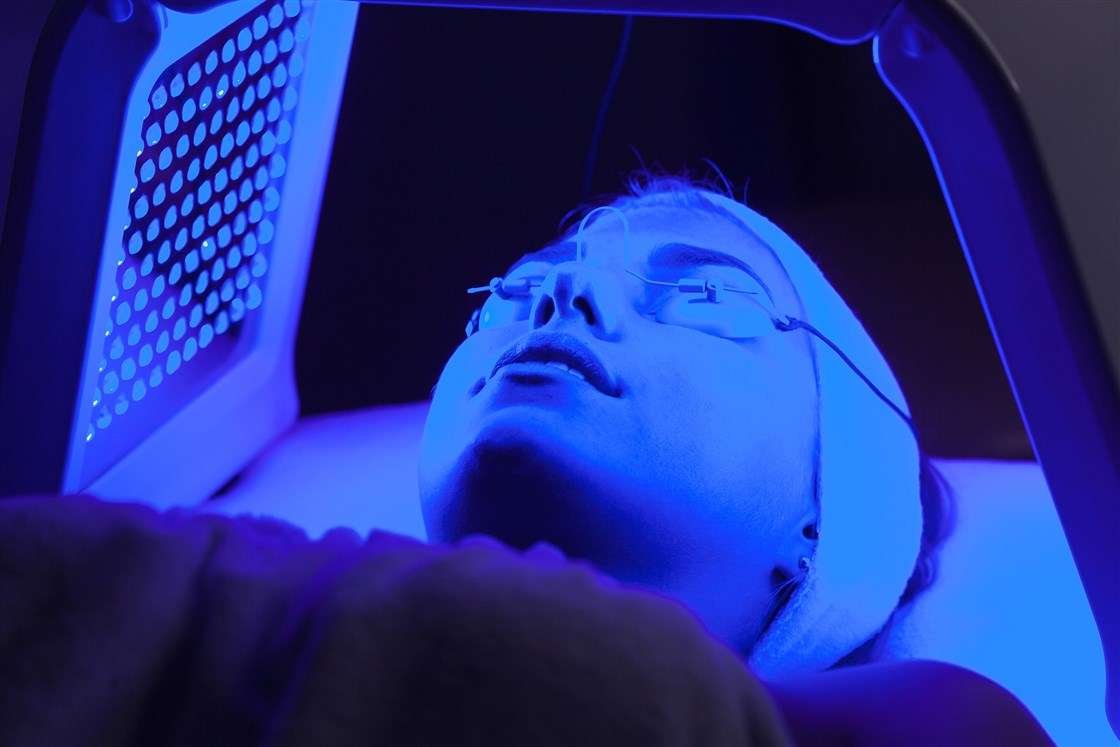 Vargas noted that with both blue and red light therapy, it can take a few sessions before you start seeing results.

"I usually tell people that LED light is one of those technologies that you're going to have to trust me for the first three to four sessions,” she said. “And then after the third or fourth one, you're just going to be out living your life, and you'll just start getting compliments on your skin. ... I've never had anybody not see a difference.”

Are there any risks involved with LED light therapy?

That said, there are certain precautions to keep in mind, said Dr. Paul Jarrod Frank, a celebrity cosmetic dermatologist and founder of PFRANKMD and the PFRANKMD skin salon in New York.

“It’s important to always wear eye shields and not look directly at the lights,” Frank told TODAY Style in an email. “Thirty minutes maximum is recommended for treatment and no more than two times per week.”

Vargas also cautioned that you can’t do LED light treatments while pregnant, if you have a pacemaker or if you’re on certain medications.

Can you do LED light therapy at home?

A number of at-home LED light therapy tools have come on the market in recent years, including masks, panels and handheld devices. Are these as safe and effective as treatments from a dermatologist or esthetician?

“I think not all things are created equal,” she told TODAY Style. “I feel more comfortable when clients purchase at-home devices where the company has shared the amount of LED lights in the device, what's the exact penetration and saturation level of the skin. When companies don't make that as clear, it's a little harder to tell if something's going to work or not work.”

Besides possibly not working as well, some at-home devices could actually damage the skin, Vargas said.

“I have had clients purchase at-home devices that created melasma (a pigmentation disorder) because they weren't quite as good as they thought they were,” she said. “So you just have to be sort of mindful of what brand you're buying and make sure that it's something that is actually effective.”

What are the possible benefits of laser treatments?

Like LED therapy, laser treatments involve light interacting with the skin. However, lasers use a much higher-energy, targeted beam of light.

“Lasers are like fancy knives,” Frank told TODAY Style. “They use a source of light, of various wavelengths, to target certain areas, while not harming other areas.”

Laser treatments are often used to treat acne and rosacea. Lasers can reduce redness associated with both conditions, and for people with rosacea, lasers can reduce the appearance of tiny blood vessels on the face.

Other common uses for lasers include removing the appearance of sun damage, hyperpigmentation, broken capillaries and acne scars.

Certain types of lasers are also great for skin tightening or resurfacing.

“Resurfacing lasers target water in the skin,” Zeichner said. “They work by creating microscopic damage to the skin and allowing it to heal itself up in a more cosmetically appealing manner.”

Are there any risks involved with laser treatments?

People with a history of eczema, psoriasis or any type of skin disease should check with a dermatologist before using lasers, Frank said.

Lasers should also not be used on people who have recently been exposed to ultraviolet radiation without protection, according to the American Academy of Dermatology. So, if you’re planning on getting a laser treatment, always wear sunscreen and avoid tanning beds (which is good skincare advice in general).

Also, because laser treatments are more intense on the skin than LED therapy, there’s the risk of developing dark or light spots, or even scars, if you're not working with an experienced practitioner.

“Make sure that you are being treated by an appropriately trained medical professional, like a board-certified dermatologist with expertise in use of lasers,” Zeichner recommended.

Frank agreed that lasers can be “risky” if used incorrectly, and he recommended that people only do laser treatments with qualified experts.

“No one above the age of 25 can’t benefit from some degree of a laser. It is safe, versatile and, when used in experienced hands, extremely effective,” he told TODAY Style. “It removes sun damage, builds and remodels collagen and decreases the risk of common skin cancer — and it makes you look great. It is the most valuable tool in my practice.”

DR Celine Leong, Astique Clinic
Acne Treatment Programme, $349
PPx Pore-Cleansing ACNE Treatment™ (PPX) is an advanced technology that combines a gentle vacuum with therapeutic broadband light, to help rid skin of acne-causing impurities, leaving your skin cleaner and clearer. It is combined with laser treatments, chemical peels and blue LED light treatment to bring about more effective results and healthier, clearer, more youthful-looking skin.
Pigment Laser, $350
At ASTIQUE, we use the Medlite from HOYA ConBio®, the latest in Q-switched laser technology. The Medlite has been studied in many clinical trials and is approved by the FDA for the successful treatment of pigmentation disorders.
Pore Toning Laser, $350
The Cooltouch CT3 plus laser is the “gold standard” non-ablative laser for wrinkle and stretch mark reduction as well as acne and acne scar treatment, and is suitable for all who are seeking a non-invasive anti-aging treatment to improve their skin and appearance.
6732 3801ASK THE DOCTOR
350 Orchard Road, #08-00 Shaw House, Singapore 238868

Dr Ivan Tan, Nu.Reflections Medical Aesthetics
Pigment Laser, from $250 onwards
This highly versatile treatment is used to treat a variety of pigmentary disorders such as freckles and sun spots, melasma and aged spots. This treatment can also help on enlarged pores and gives the skin an overall rejuvenated appearance.
Mosaic Resurfacing Laser, from $600 onwards
Mosaic Resurfacing Laser is one of the most effective treatments for skin resurfacing, to treat wrinkles and fine lines, photo damaged skin and acne scars.
+656235 5333ASK THE DOCTOR
123 Penang Road, Office tower #05-12 Regency House (next to old Cockpit Hotel), Singapore 238465

Dr. Elias Tam Tak Chuen, EHA Clinic
Laser Hair removal, Call to Enquire
The price varies according to the area treated and starts at $214 for the upper lip area for one session. Laser hair removal using Soprano XLi is a safe hair removal treatment for even those with tanned or dark skin tone.
Skin rejuvenation laser, from $428 onwards
Laser for skin rejuvenation or pigmentation using Q-Switch - starts at $428 for one session
+65 6235 3325ASK THE DOCTOR
1 Scotts Road, #15-01 Shaw Centre, Singapore 228208
blog comments powered by DISQUS back to top
Back to articles