Milia Seeds: What Are They and How Do You Get Rid of Them

They appear out of nowhere: a slew of tiny and painless — albeit, nonetheless, pesky — white bumps. They're minuscule, almost undetectable even, but you figure you'll try to pop them anyway because textured skin isn't what you're going for. But when you do give 'em a squeeze, nothing happens — no puss, no blood, nada. It's a totally unexplainable popping fail, so naturally, you begin to wonder what the deal is. 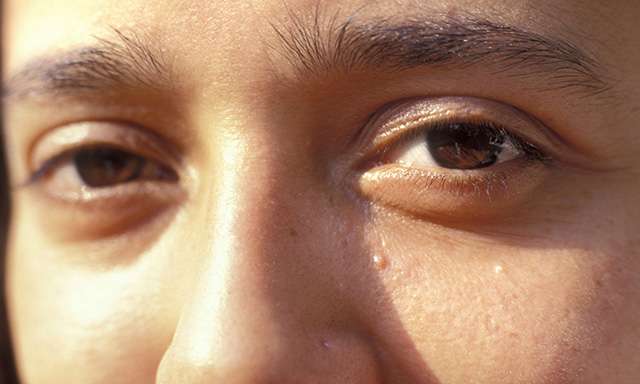 The deal, my dear friends who have experienced the aforementioned sitch, is known as milia, which, in short, are cysts made of keratin, says New York City-based dermatologist Shari Marchbein. She explains that keratin is a protein in the outermost skin layer called the stratum corneum, which forms your hair, nails, and skin. While milia do indeed look like whiteheads, that's where most of the comparisons come to a halt. Unlike acne, milia can develop without rhyme or reason and cannot be extracted the way typical blemishes can, says Marchbein. Read on for the full deep dive on milia and how you can treat those little bumps once and for all.

Who Does Milia Affect?

According to Marchbein, milia can happen to just about anyone regardless of age or skin type, but are more prevalent in those with chronically sun-damaged skin. "[They're] commonly found on the face, especially the nose, cheeks, and around the eyes [and can] be seen in all age groups from babies to adults," she says. Sejal Shah, a dermatologist in New York City, also added that milia have been associated with genetic syndromes such as Rombo syndrome, basal cell naevus syndrome, and Gardner syndrome, to name a few.

Why Do They Appear?

While Marchbein says milia can, in fact, pop up without rhyme or reason, she does note that they're more commonly found in conjunction with certain skin conditions such as rosacea and dandruff, or when skin-care and makeup products clog pores. Shah also explains milia can occur when keratin gets trapped under the surface of the skin when there's skin trauma (i.e. burns, blisters, etc.), or after the use of certain topical medications. Other than that, milia are just one big annoying enigma.

Can You Prevent Them?

The short answer is, sadly, not really. "If you are prone to getting milia, there is no true way to permanently prevent them from forming," says Marchbein. That being said, there's a whole host of ways to kick 'em to the curb, detailed ahead.

How Can You Get Rid of Them?

Like acne, milia can be eradicated in a number of different ways, including with chemical peels, retinoids, and AHAs. The best plan of action, however, would be to visit your dermatologist to have the milia de-roofed with a sterile needle or scalpel or with a laser, which Shah says is done with an electrically heated needle.

Marchbein also adds that if you're someone who is prone to milia, you should try using a combination of oil-free, non-comedogenic products.

There you have it, folks, the scoop on yet another frustrating skin woe that our world would most certainly be better off without. But, hey, at least you know how to deal with it now, right?

This article first appeared in Allure.